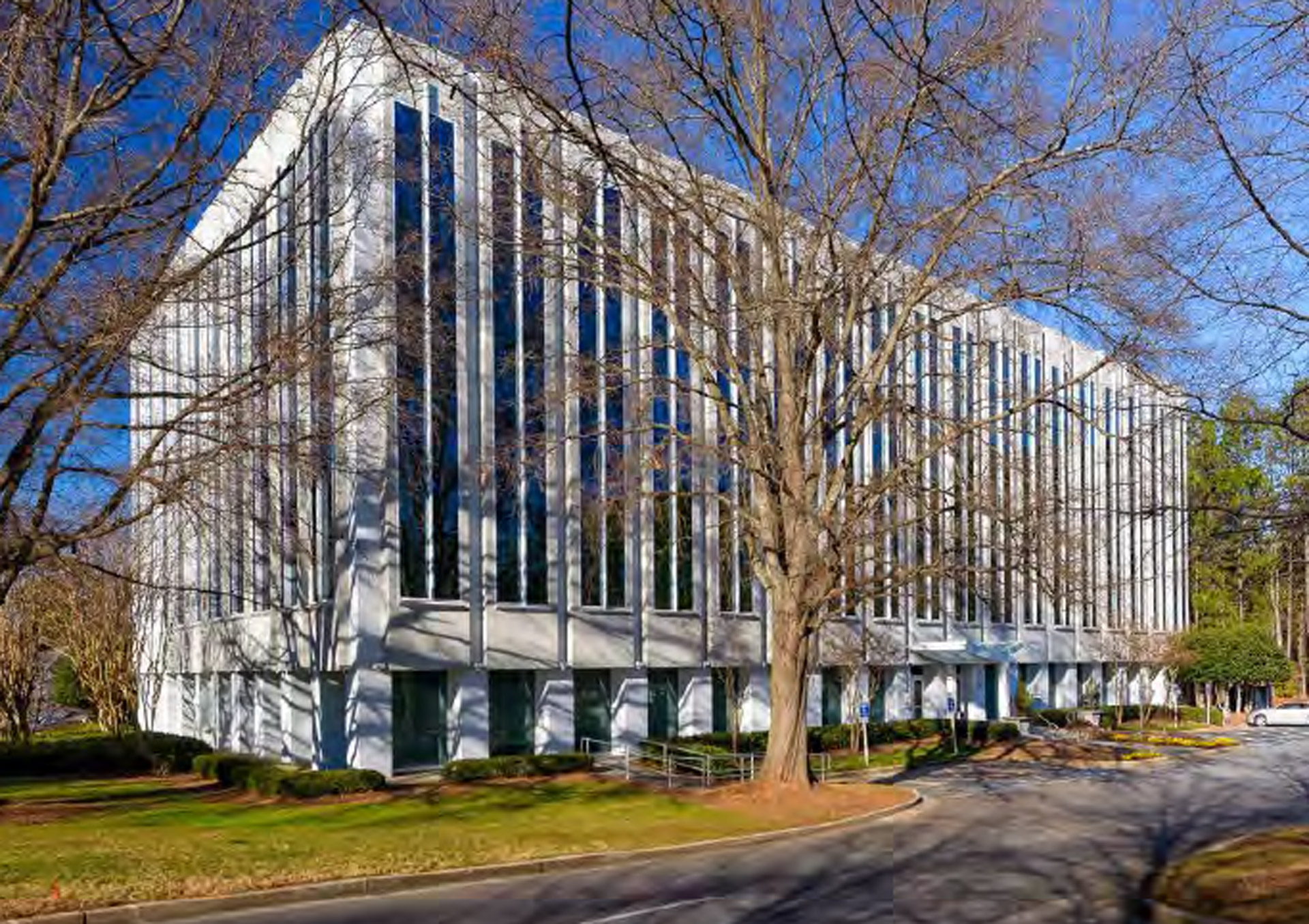 The investment was funded in August 2019 for this well located 98% leased high-tech office campus in a strategic location where we will add value by migrating the tenant mix from commercial to long-term medical tenants, unlocking the potential for strong capital growth over the 5-year investment period.

INVESTMENT OVERVIEW
The equity investment of $5 million is available from $5,000, in the real estate called Glenridge, located in the Central Perimeter of Atlanta, United States.
The two mid-rise 5-story buildings were built in 1972, and have received $1,3million renovations in 2017 that included replacing the roofs, HVAC’s and elevators. The buildings are 185,402 square feet in total, positioned on 10,05 acres, adjacent to the Southeast most strategic interchange at the intersections of I-285 and Georgia 400, which carry 400,000 cars each day.
As Central Perimeter’s closest office node to Buckhead, this distinctive quadrant is walking distance from a long-list of dining options, several hundred high-end multi-family units and established executive single-family neighbourhood’s including Chastain Park, Capital City Club/Brookhaven, and High Point/Meadow-brook. Central Perimeter is widely known for its popularity among large corporate tenants
The location also benefits from its proximity to the Medical Center MARTA station, less than ½ mile east of Glenridge. This MARTA station is in the heart of “Pill Hill”, the Southeast’s largest concentration of medical facilities and services, which consists of three major hospitals and is Glenridge’s neighbour to the east.
The buildings commercial tenants will be replaced over time for medical service providers, and the long-term strategy is to expand the lettable square ft by adding a new medical wing on the unutilized land. .

MARKET OVERVIEW
Atlanta enjoys growth in population, jobs, and income. Atlanta’s economy continues to outperform the nation, and its unemployment rate is at its lowest point in more than a decade. The metro area continues to attract relocations from workers and businesses, and Atlanta is one of the nation’s fastest-growing MSAs as a result.
This is reflected in Atlanta’s medical office market, which continued to enjoy low vacancy levels and rising rental rates, along with limited construction. Demand was very strong in Atlanta’s medical office sector during 2018, and healthcare continues to be a growth driver in the local economy.
For the past several years the Atlanta medical office market has seen steady levels of demand and limited development, which has brought vacancy down from over 15% to less than 9% today. This has given rise to healthy rent growth and gained the attention of investors, who see Atlanta as a strong market in which to deploy capital.

More development is likely to begin in the coming months, and the market can certainly benefit from additional product in high-demand neighbourhoods. In 2019 we expect to see continuing rent growth, a rise in new construction and a vacancy rate that will continue ticking downward.
We are seeing Cap Rates moving higher, predominantly due to the past years of increases in the interest rate. With the construction activity slowing and the Fed increasing dovish sentiment we anticipate that the Cap Rates will stabilize in 2019.

LOCATION OVERVIEW
Atlanta, Georgia is the capital city of Georgia and is recognized as an international gateway that is also an emerging Tier 1 technology hub and the established economic engine of the Southeast.
The metropolitan area is made up of 29 counties spanning 22,592 square kilometers. Metro Atlanta is one of the fastest growing metros in the U.S. and has the 10th largest metro economy in the U.S. as measured by Gross Metro Product (GMP). The area is home to 5.9 million people and more than 150,000 business establishments.
The Southeast’s population is 83.7 million, and its economy is the largest of all U.S. regions. Gross Domestic Product (GDP) in the Southeast measured $4.1 trillion in 2017.
While Atlanta’s quality-of-life characteristics have historically proven to be a primary draw for immigration, tremendous job growth from relocating and expanding companies has been particularly impactful during this expansion cycle with more than 400,000 net new jobs added in the last five years.
Diversified and substantial investment from corporations and state and local governments make Atlanta an incredible place to do business. As further proof that Atlanta is a mainstay of global commerce, this fast-growing metropolis is also hosting to the busiest airport in the world, Hartsfield-Jackson International Airport servicing more than 100 million passengers per year.
As the economy remains in expansion mode, Fortune 500 businesses continue to focus on streamlining their operations in regions with lower operating costs and a well-educated, growing labour force. This talent pool coincides well with Atlanta’s prime location within a short-flying distance of a clear majority of US population centers. Atlanta’s concentration of highly-educated professionals will continue to make the area a preferred destination for corporate relocations and expansions.

NEIGHBOURHOOD OVERVIEW
One of Atlanta’s first major suburban submarkets, the Central Perimeter office submarket is situated between the North Fulton submarket to the north and Buckhead to the south. This high-profile office location is entered on the intersection of Interstate 285 and Georgia Highway 400 and extends north to the Chattahoochee River.
The nucleus of the Central Perimeter submarket remains in the immediate vicinity of Perimeter Mall on Ashford-Dunwoody Road where the submarket originally evolved. Other office nodes have developed in the Central Perimeter area as the submarket’s center of gravity has shifted to become more balanced along the GA 400 corridor. The area possesses a mature amenity base of hotel and retail development to support a large base of white-collar office employees.
The Perimeter Center district is one of the largest, employment and retail districts in Metro Atlanta and offers approximately 200,000 jobs. The jobs are in high-paying industries, such as healthcare, technology, and finance/insurance and have led to nearly 82% of residents possessing white collar jobs and average household incomes of nearly $134,000 per annum.
Central Perimeter is the location of choice for many of Atlanta’s businesses professionals who desire a suburban location with an in-town feel in proximity to all of the urban amenities. The market has experienced an “urban renaissance” with the creation of executive housing, quality mid- to high-rise residential complexes, restructured streetscapes, and ongoing infrastructure improvements.

As such, the area exhibits a true live-work-play environment that today’s business professionals demand.
The immediate three-mile radius encircling the property boasts a population that totals 98,272 and is projected to grow by 11% towards 2023.
Within the area, the Perimeter Community Improvement Districts (PCIDs) are self-taxing districts that use additional property taxes to help accelerate transportation and infrastructure improvement projects. The PCIDs are leading the charge to implement vital transportation enhancements coupled with land use and zoning strategies that will enhance mobility and improve access throughout the entire Central Perimeter submarket. Their mission statement and tag line are simple: to create the Southeast’s “Premier Liveable Center.”
An estimated $101.4 million is expected for Sandy Springs during the next five-year term towards improved mobility. Some of the most impactful projects to Glenridge Medical 22 include:
The hospital systems with a major presence in the area include:
CAPITAL STACK